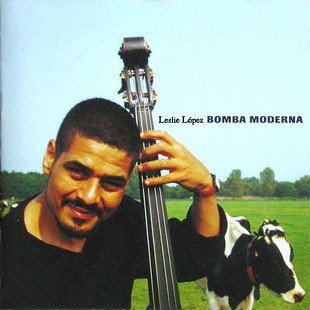 Leslie Lopez- Electric bass, Ampeg Baby bass, arranger, composer, teacher. Born In Puerto Rico (1958) and moved to New York at age 17. In New York he studied music at the State University of New York at Stony Brook. There he played with many local bands some are: Sonora Borinquen, Evolution 2000, and with several other salsa artists as a freelance bassist during 5 years.

He has given salsa work-shops throughout Holland and Europe.

At the conservatories of Rotterdam, Amsterdam, Utrecht, Arnhem, Hilversum, In Belgium, Finland, France, and private.

He has recorded with many groups in Europe and some are: BESS, Enos, 110, Conexion Latina, Ruben Salas, John Mars­hall, Akede, Rumbata, Cubop City Big Band, Nueva Manteca, New Cool Collective, Gerardo Rosales, A lot of free-lance work, and his own CD Bomba Moderna has placed his name in the European compo­ser/arranger map.

He has presented his CD "Bomba Moderna" with original rhythms and compositions. And has played Festivals in Europe with his group. At this moment Leslie López is busy with new projects including his second CD.