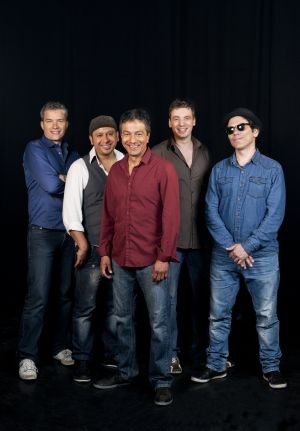 A brand new band with a fantastic rhythm section, lots of percussion, electronics and steaming vocals. Don’t forget your dancing shoes!
With this new and exciting group, Jaime is proud to present his latest CD, with the title
“La Loma De LA Cruz”. Enjoy!

Jaime Rodríguez was born in La Union, Colombia, and grew up in a musical family in the city of Cali. At the age of twelve, he began his musical studies at the Cali Conservatory, continuing them at Universidad del Valle. In 1981 he moved to Spain and studied at the Conservatory in Seville. In 1983 he began his studies in Latin percussion, composition and arrangement at the Conservatory of Rotterdam. After graduating, he founded the salsa orchestra Rumbatá in 1990, since he serves as musical director.

He has composed and arranged a lot of pieces for the orchestra and presented two special programs touring the Dutch theatres: the suite “Cuatro Estaciones de America Latina” to commemorate 10 years of existence of Rumbatá and ‘Cantos del Caribe’. He produced five Cd’s with Rumbatá.

In 2000 he formed the ‘Jaime Rodriguez Latin Music Ensemble’ to create the programs ‘From Cuba to Colombia’ and ‘Noche de Ronda’ with which he toured the Dutch theatres. In 2003 he formed Rumbatá Big Band extending his orchestra to 22 musicians to play exclusively Colombian music with modern arrangements based on jazz.Apart from giving concerts in Holland and Belgium Rumbatá Big Band toured three times Colombia giving concert at jazzfestival and in concert Halls in Bogotá, Cali, Medellín, Barranquilla, Manizales, Palmira and Yumbo, and produced a studio album. The Big Band has been invited sereral times to play at the famous Amsterdam Bimhuis, with live broadcast on VPRO radio and a DVD release. Another concert at the Bimhuis was broadcasted live by NOS radio.

Jaime has been a producer of Latin music since 1993 (see the discography). In 1996, he began his own recording studio, ‘Camina Music Studio’. Every summer Jaime runs workshops in percussion and Latin music at Stichting Buitenkunst [the Outside Art Foundation]. On order of this organisation, he recorded the CD ‘Wereldritmes Colombia’ [World Rhythms Colombia] in 1997.